Click on any of the links below to view Topics

When you backbore a barrel you are enlarging the bore size of the barrel. When this is done it does several things: It usually is done to increase the amount of choke with a given choke diameter.

A back-bored barrel is a shotgun barrel that has a bore diameter that is increased beyond the minimum specifications. Increasing the bore diameter of a shotgun barrel greatly enhances its performance. As a larger bore diameter reduces friction of the shot charge against the barrel wall. Instead of trying to overcome friction, powder gases expend more energy on the wad base, resulting in an increase in shot velocity. Because there is less constriction or pressure from the barrel walls on a shot charge, there are fewer deformed shot pellets. A greater number of ballistically superior round pellets in a shot charge gives you exceptionally uniform patterns -- delivering more shot pellets in the effective part of your pattern.

When the bore size is enlarged even more , say to .742 thousandths then you would have .052 thousandths of choke with the same .690 choke tube.

Backboring can improve a shotgun's capabilities to a certain extent but has its exceptions. Backboring also is to be believed to increase velocity to some extent and also it shortens the shot columns length during flight and this will enable more shot to hit the target at one time which is better for making clean kills on game.

One of the exceptions to backboring is that if you get too big with the bore size for a given gauge size then you are going to have problems with hot gasses blowing by the wadding upon firing. This is going to interfere with the shot charge severely upon exiting the barrel and you will get poor results from your patterns.

Example of too large a  boresize :

Take a 12 gauge size wad which is designed to seal the gas pressures behind the wad and fire it from a 10 gauge bore size ,  you will have a severe gas blowby condition which will result in blown patterns.

When you backbore a barrel, you are limited as to how big you can get when you are using a choke tube in the barrel. It is critical that the bore doesn't get larger than the  rear skirt area of the choke tube. If this happens, then the choke will be blown out and damage the barrel.

As you can see, there is much more to backboring than just boring the barrel out to enlarge the bore size without considering the results. This is best left to someone who understands the aspects of it.

Chokes work by constricting the shot charge by a given amount , which is usually measured in thousandths of an inch.

The constriction of a choke is determined by the actual difference between the tightest inside diameter measurement of the choke , and the actual bore diameter of the barrel.

Measuring your choke dimension only goes so far. Just because a choke measures a certain dimension doesn't mean that it will shoot what it should because different guns with the same choke constriction will shoot different patterns. You have to test shoot it if you really want to know what it's doing , regardless of what your choke is marked. Choke alone does not determine whether a particular gun will shoot to its fullest potential.

Tight , uniform patterns require that everything be carefully controlled in the shotgun and ammunition being used.

This transition has alot to do with how the gun performs with given loads. Most factory guns have a forcing cone length of only 1/4 inch to 1/2 inch long and this short abrupt taper into the barrel deforms a lot of shot upon firing a given load.

By lengthening the forcing cone out to around one and one half inches or longer , this reduces the angle of the taper leading into the barrel and reduces the deformation of the shot charge.

You can improve patterns by as much as 15 percent and also the long forcing cone will reduce recoil because the shot charge has less resistance going into the barrel hence the less felt recoil.

By extending this tapered section you do not actually reduce the amount of recoil, but rather extend the period of time that the recoil is felt. Therefore, it feels like a reduction of recoil.(lower pressure peak)Because the transition is longer, fewer shot become deformed as it travels through it. The less deformed shot there is then the more dense the pattern becomes and this is how the patterns improve 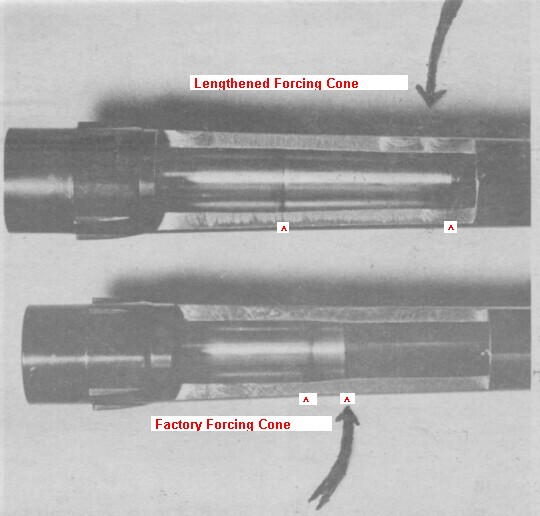 All barrels and chokes are not constricted equally despite their markings.

Pattern performance depends on other factors besides just choke. The only way to really know what a given gun and choke combination is doing is to actually pattern it.

The best way is to go to your local hardware or builders supply store and get a roll of red rosin paper which is 36 inches in width, then cut you a piece off to use as a target and place it at 40 yards, then shoot this target with the gun and choke combination with the shot size that you plan on using.

This is the only way to know what your gun is really doing.

Back to Main Page